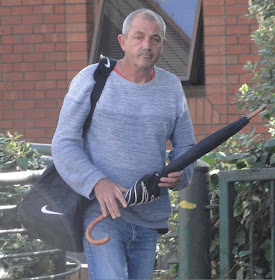 The prosecution of a blogger accused of stalking social commentator Sonia Poulton, plus a second woman who says she was sexually abused by establishment figures as a child, has been dropped.

Darren Laverty, 49, of Maes Hyfryd, Beaumaris, Anglesey, who was said to have tweeted to Ms Poulton or about her over 300 times was due to stand trial in September.

However, at Kingston-upon-Thames Court last week the Crown Prosecution Service announced there was no realistic chance of securing a conviction.

The second woman is 34 year-old Esther Baker, who in 2015 waived her right to anonymity to claim she was abused by a former MP as well as a judge and a peer.

She said abuse occurred at an apartment in Dolphin Square, Westminster and Staffordshire woods when she was aged between six and eleven years-old.

Father-of-three Laverty blogs about Wrexham’s Bryn Estyn children’s home, which is at the centre of an abuse enquiry.

He has always fought the charges and now not guilty verdicts have been entered in relation to both women.

He had been charged with one count of stalking, involving serious harm or distress, between January 30, 2015 and May 12, last year,  causing Sonia Poulton serious alarm or distress, which had an adverse effect on her day-to-day activities.

The 52 year-old writer and broadcaster is a regular guest on ITV’s ‘This Morning’, often commenting on issues involving children.

She has written many articles, most notably for the Daily Mail and Daily Express.

Prosecutor Miss Amanda McCabe told Wimbledon Magistrates Court during Laverty’s first appearance: “The complainant is a journalist and after the Jimmy Savile enquiry she began reporting on it and receiving abuse from people, and the police say one of them is the defendant.

“She feels this is a sustained campaign against her and she’s harassed by the defendant. Most of this has taken part via twitter.

“The defendant tweeted either about or to the complainant on approximately three-hundred occasions, causing her to suffer alarm and distress.

“If convicted the defendant is likely to receive a custodial sentence.”

Laverty was separately charged with stalking Ms Baker, involving serious harm or distress, on April 14, last year by speaking about her on social media.

After the case was dropped Ms Poulton said: “It’s a very serious error and unfortunately for those responsible I have it in black and white.

“The CPS are blaming the Met Police and vice versa. I have filed a complaint and taken legal advice.

“For four years I have been stalked. I have been threatened with murder, accused of being a paedophile, my employers have been contacted and told I was responsible for the murder of child abuse survivors.

Screenshots of my home were put on social media as the gang encouraged people to come and finish me off.

“I have a panic alarm in my home and a personal alarm. Four hundred pages of evidence resulted in the CPS charging a man last year.

“Today it is all over twitter that the charges have been dropped and yet the CPS have not informed me of this.

“The Metropolitan Police made it clear to me that something had taken place behind the scenes.

“Another woman, also the victim of this man, has also been let down. We are dealing with connected people with serious sex attacks in their history and influential links.

“I, and this woman have been thrown to the wolves. More information will be revealed.”

Ms Baker said: “Unfortunately I’m still waiting for the CPS to have the basic courtesy to let me know instead of me finding things out on twitter. I am, however planning to appeal their decision.

“I can’t see any reason why he should get away with what he and his friends have been doing for so long.”
Editor at 14:50
Share