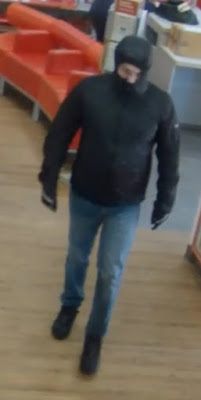 Police are hunting this robbery suspect, who attacked a security guard delivering cash to a Post Office.
On Tuesday, February 16 at 1.30pm the security guard, a 50-year-old man, was delivering cash in Hampstead High Street, Hampstead.
The suspect attacked the guard from behind, pushing him and punching him in the face.
Detectives do not believe that the suspect was armed.
The victim suffered head and shoulder injuries and was taken by London Ambulance Service to a north London hospital.
He was released later that day.
The suspect is described as a tall, white man, wearing a black padded, hooded coat.