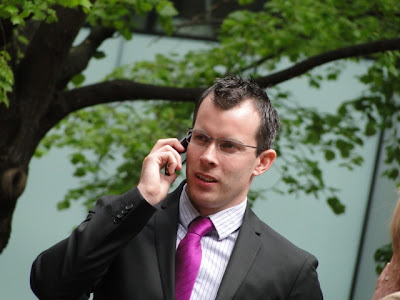 A decorated police sergeant - convicted of assaulting a violent gang-member prisoner who spat in his face - later boasting in the pub of giving him: "a good shoeing," has been cleared on appeal.

They claimed Leak, (pictured) the on-duty custody Sergeant, flew into a rage and swung the prisoner into the cell wall and repeatedly forced his head into the floor.

The officers, PC Charles Hayzeldon and WPC Angela Duffy, repeated their accounts during a two-day appeal at Southwark Crown Court, but a Judge ruled on Friday the force used was not unlawful.

Sergeant Leak, who received a commendation for successfully tackling a dangerous knifeman while unarmed, was described in court as 'first rate' and a 'leader' by senior officers.

He served nearly three years with the Territorial Support Group and suggested a rivalry between Shepherd's Bush and Fulham police officers in the borough contributed to the complaint.

Summers - who repeatedly chanted: "MDP (Murder Dem Pussies) all the way" - used the toilet to flood the cell, urinated on bedding and spat in Sergeant Leak's face.

"Those two officer will say Sergeant Leak over-reacted and acted out of anger, without regard for the detainee or officer safety," prosecutor Mr. Gavin Ludlow-Thompson told the court.

"Others heard Sergeant Leak at a social event in 'The Cock' public house say he gave the detainee a: 'Good shoeing.'

"We say that amounts to an admission that Sergeant Leak went into the cell with the intention to deliver some retribution."

Summers had been arrested for disorderly conduct and later pleaded guilty to assault and criminal damage at the police station and refused to give evidence at the appeal.

"When Sergeant Leak went to the cell door wicket and told him he would be questioned in the morning Summers spat through the gate, hitting the officer in the face and some got in his eyes," explained Mr. Ludlow-Thompson.

The court was told Leak demanded the cell door keys while shouting: "He just fucking spat in my eyes."

Mr. Ludlow-Thompson added: "He is plainly acting out of anger at this stage.

"He grabs Summers, pulls him to his feet, and swings him into the wall. When the prisoner is on the floor Sergeant Leak pushes his head into the ground forcibly."

The other two officers report Leak for assault and a doctor finds Summers has reddening and scratching to his face.

The officer was placed on restrictive duties while the Independent Police Complaints Commission carried out an investigation and was suspended following his conviction.

City of Westminster Magistrates Court sentenced Leak to a community order, which included an electronically tagged night time two-month curfew and ordered him to pay £500 costs.

He told the court the force used on the violent and aggressive criminal - captured by the cell's CCTV and watched in court - was reasonable.

Sergeant Leak's account was backed by senior officers who insisted he acted correctly in taking the prisoner to the wall to restrict movement and then to the floor to secure leg restraints.