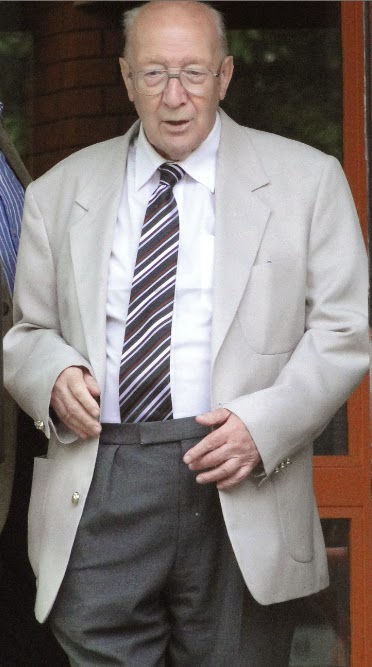 An anglican priest at a landmark South Kensington church sexually abused two young alter boy brothers in the vicarage during weekend sleepovers - plying one of them with sherry and port - a court heard today.

Father Kenneth Hewitt, 84, bathed the boys - who visited separately - and got into bed with them and molested them at St. Augustine's Church, Queen's Gate, the jury at Isleworth Crown Court was told.

The brothers attended St. James Independent Boys School across the road from the church and the elder says he was abused between the ages of nine and ten years-old and his younger sibling says he was aged seven to fourteen years-old.

They are now aged 42 and 38 respectively and the youngest claims he was molested thirty to forty times by Father Hewitt, who took him to museums, restaurants and shops and treated him to alcohol and ice cream at the vicarage, where he also showed him Victorian books featuring naked children.

Prosecutor Mr. Subhankar Banerjee told the court pupils were encouraged to become alter boys at the church -  a favourite of late Poet Laureate Sir John Betjeman - and the defendant himself was particularly popular.

"He was someone people could trust and respect and was considered nicer than a lot of the teachers."

Father Hewitt was friendly with the boys' mother, who allowed her sons to sleepover at the vicarage, believing the defendant to be a good "mentor" for her sons.

The older boy only stayed twice, once after a church service and once after school.

Father Hewitt allegedly described the youngster as his "special boy" and made "grunting noises" as he molested him.

Three weeks later the scenario was repeated with the defendant washing the boy between his legs and inserting his finger into the complainant's bottom, the jury were told.

The defendant "lingered" around the boys's bottom when towelling him off, explained Mr. Banerjee, and again molested him in the bed.

On another occasion the boy was changing into alter clothing for a church service when Father Hewitt approached, said the prosecutor.

"He said he would smooth out his clothes and rubbed his penis over the gown and said: 'There you are. You look special'."

The younger brother stayed overnight every two to three weeks for several years and says Father Hewitt bathed him, lingering between his legs.

The priest also asked the boy to wash him and took him to bed, where he was abused, the jury were told.

"These activities took place thirty to forty times," said Mr. Banerjee. "The same thing happened four or five times when the defendant took him to a bungalow in Norfolk."

The defendant was questioned by police in April, last year. "He denied anything of a sexual nature ever happened."

Father Hewitt, of Bromley College, London Road, Bromley has pleaded not guilty to five counts of indecently assaulting the older brother between June 15, 1980 and June 16, 1982.

He denies two counts of repeatedly indecently assaulting the younger brother between May 13, 1982 and May 14, 1989, plus one count of indecency with a child in relation to the same complainant.

Please note that the Reverend Kenneth Hewitt was found not guilty on any of the charges by a unanimous jury at a second trial and completely exonerated.

Us and many other very young children who attended St James Independent School for Boys in South Kensington, which was across the road from the church, were frequently left alone in the hands of 'Father Ken' for hours at a time by unqualified teachers from St James during the school day.

One of the later vicar's in St Augustines church later stated to me "It was always common knowledge within the Clergy that Father Ken had 'a thing' for young boys.

Kenneth Hewitt was found not guilty only because he had had sex with each child individually, when nobody else was ever present. This matter is currently in the process of returning to court, as a civil lawsuit.

So sad to read this just now, I can't imagine the trauma this man has caused to these people as children. I was searching the church and remembered the man's name. Sorry not to be shocked, having attended St James in the 80s those times never left me as well.