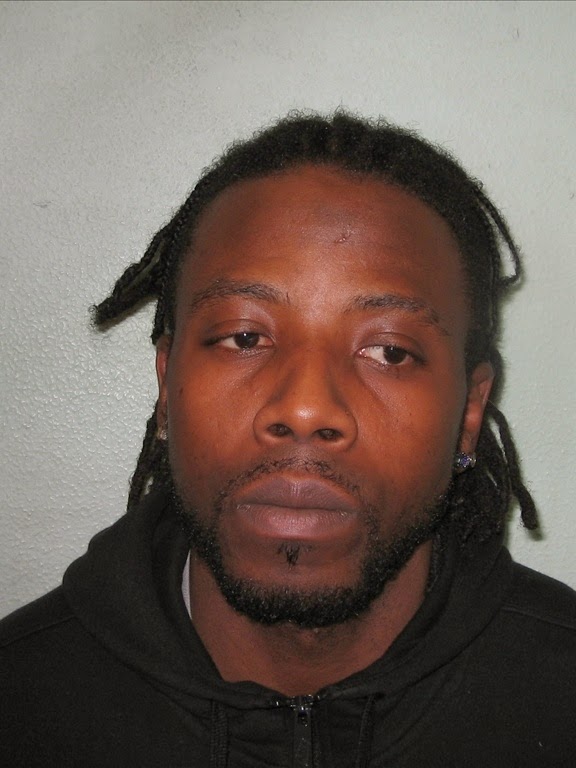 The owner of two illegal pit bull-type mongrels, one of which clamped its jaws around the head of a four-year girl and dragged her off her scooter, has been convicted.
Hezron Curtis, 35, (pictured) was walking the animals in Kentish Town on December 4, last year when the toddler, who was with her mother and eight year-old brother was attacked near Gospel Oak station.
He was found guilty of possession of a prohibited dog and two counts of being in charge of a dog dangerously out of control in a public place.
Curtis, of Laurier Road, Kentish Town knew one of the dogs was a danger after it chased a cat into a home in Denyer Estate, Camden four months earlier - bit a man - then killed the cat.
The young girl injured in December was taken to hospital with serious facial injuries, including potentially life changing injuries to her eye.
Investigating officers would later view shocking CCTV footage of the incident, which showed the dog jumping up and attacking the child completely unprovoked, biting her face and pulling her off her scooter.
The first dangerous dog has been ordered to be destroyed.
The second dangerous dog awaits a formal Magistrates Court decision order for destruction.
As a result of the incident in December 4, police launched a review of all previous allegations of dog bites in Camden.
This matter was referred to the Independent Police Complaints Commission (IPCC), who instructed that it should be investigated by the MPS Department of Professional Standards (DPS).
Four officers are currently the subject of an internal investigation relating to the August incident.
Detective Constable Shu'aib Gafur from Camden CID said: "This was a horrific dog attack on a young girl innocently riding her scooter.
“The brutal attack was witnessed by her eight year old brother and her mother who desperately tried to rescue her daughter.
“It has been a very traumatic time for the family.
“I hope today's verdict brings some form of comfort to the family and helps them to move forward.
Posted by Editor at 16:30